In 2023, Google will remove the third-party cookie system from your browser, granting one more year of margin to developers and advertisers who will have to adapt to this new future in the advertising industry. Other browsers such as Firefox have already incorporated a stricter tracking protection system in their latest version.  When activated, instead of storing all cookies in one place (allowing Facebook and other platforms to cross and cull data), isolated storage will be created in the browser for each website. If the user decides to delete cookies from one site, the data generated by other sites will also be eliminated. Apple’s Safari has been the most involved in protecting its users’ privacy, providing users an option to prevent third-party cookie trackers since 2019.

This massive shift has created a great stir in the advertising sector, but it may also provide an opportunity to accept it as a greater good for all. That’s the idea behind data ethics: making the internet a safer and more transparent place for everyone. As companies, our users will be more likely to trust us if we do not limit ourselves to mere compliance with the rules and instead bet on an strong defence of their fundamental rights, including privacy.

Google informs users that they can customise privacy controls in Settings.

Third-party cookies have been an essential element for monitoring users’ browsing habits… until now.  But people’s privacy expectations are becoming increasingly strict and nuanced: What personal data do we give up when we browse a website? And to whom exactly?

This has led to an open source initiative called The Privacy Sandbox, championed by Chrome since 2019. Its mission is ideally to develop new technologies that eliminate the most common tracking mechanisms. In other words, to not collect users’ personal information while they browse websites. Or at least, not in the manner as it has been done in the past. The main changes consist of:

This reality clashes with the need for companies to reach their potential customers with relevant ads and measure subsequent results. Is there a way to achieve these goals without monitoring users through cookies? Google offers several examples for advertisers regarding this change in mentality when planning a digital strategy that respects privacy:

More control for Google through FloC?

Since 2018, the mandatory compliance General Data Protection Regulation (GDPR) in the European Union gives users the option to choose which third-party cookies they want to host in their browser. That’s where the Privacy Sandbox programme and its dreaded API FLoC (Federated Learning of Cohorts) began. It is based on machine learning which is used to track browsing not individually (as with current cookies) but in conjunction with thousands of profiles that share similar browsing histories.

The group (or cohort) is collected with raw data by the browser and its size is intended to give more anonymity to its members. The group is not stored per se, but the API assigns a cohort id to each user in the group and the final information is sent to companies so that they can direct their advertising to that group as a whole.

While the industry waits to see what happens with this set of standards promoted by giant multinational, some lesser known browsers such as  DuckDuckGo and Brave have come out swinging against FLoC because it gives Google exclusive access to data and, contrary to what one might expect in a privacy-centred initiative, it is automatically activated when you use Chrome or when you log in to a Google account. For this reason, both DuckDuckGo and Brave are committed to blocking FLoC interactions in favour of greater privacy.

For its part, the UK antitrust authority is investigating whether Google’s plan to delete third-party cookies could harm advertising competition. The Electronic Frontier  Foundation (an NGO defending civil liberties in the digital world) also claims that FLoC is “a terrible idea“. In addition, well-known voices such as Rand Fishkin have shown their disagreement with the proposed system: 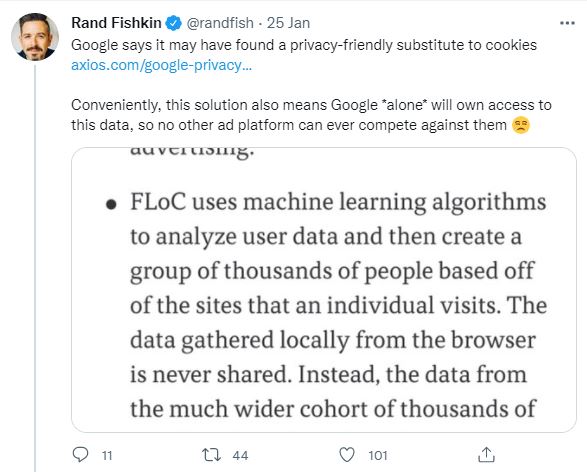 What can advertisers do?

Assuming that Google has the largest global market share among search engines (no less than 70%), it seems unlikely that advertisers to be able to reject this change. Our advice: don’t wait until the last minute to prepare for FloC, but at the same time, avoid being an early adopter, in case final implementation is again postponed beyond 2023.

As the internet becomes more in-sync with data ethics for the betterment of our digital society, changes are necessary and expected. What remains to be seen is whether Google also applies the same ethics to itself, or whether it will be users who end up looking for other options. This could signal a golden opportunity for other search engines to stand out from Google by offering the privacy that users demand.

If you need help to focus and adapt your advertising strategy to the changes that are coming, feel free to contact All Around.

What is FLoC?  (official site)

Am I FLoCed?  (test site, see if Google is testing FloC on you)

How to use €1,000 for Digital Ads Testing: Google Ads and Social Media Marketing

Web design standards: What they are and why they are important your business.